Is it possible to look at the first moments of the universe, less than a second after its origin? Daniel G. Figueroa investigates this possibility by using gravitational waves as a window to observe that fraction of a second after the origin of the universe. These waves are disturbances of space-time predicted by Einstein more than 100 years ago, but first detected in 2015. Figueroa joins the Institute of Corpuscular Physics (IFIC, CSIC-UV) with a Ramón y Cajal contract to study the properties of these primordial waves, as well as to determine the possibilities of measuring them with LISA, the future satellite of the ESA designed to measure gravitational waves in space.

Unlike the gravitational waves recently detected by LIGO and Virgo, created in extreme astrophysical processes such as the collision of black holes, those sought by Figueroa were originated in the first moments of the universe, during the process of cosmic inflation or just after it. Inflation is a dramatic period in the history of our universe during which space expanded exponentially over an infinitesimal fraction of time: two points separated by one centimeter were distanced to 1028 centimeters in less than 10-36 seconds!

After this period there were multiple phenomena. One of them is known as 'reheating' of the universe, where the energy responsible for inflation (much greater than the one ever achieved in a particle accelerator) was transformed into elementary particles, including probably the Higss boson of the Standard Model. This creation of particles from inflationary energy is, in fact, highly explosive, which in turn results in the creation of gravitational waves.

Precisely in the study of post-inflational reheating and the creation of primordial gravitational radiation did his thesis Daniel G. Figueroa at the Institute of Theoretical Physics (IFT, UAM-CSIC). After finish his PhD in 2010, he made postdoctoral studies at the universities of Helsinki and Geneva, as well as the Department of Theoretical Physics at CERN and the Federal Polytechnic School in Lausanne (EPFL), where he continued to research the production of primordial gravitational waves, extending his study to the inflationary process itself and to other reheating processes of the universe such as thermal phase transitions or the production of topological efects such as cosmic strings.

Figueroa research interests deal with how described phenomena elapsed at the dawn of the origin of the universe create a continuous distribution of gravitational waves that permeates the entire universe. These gravitational radiation fields are stochastic (it means that they can only be described statistically) and would form a background that would be present throughout the cosmos, similar to cosmic microwave background (CMB), the first 'light' of the Universe. However, while the electromagnetic radiation of the CMB is a photograph of the universe when it was 400,000 years old, a stochastic background of gravitational waves would refer just a fraction of a second after the origin of the universe.

Gravitational wave research experienced a revolution with the first direct detections by the LIGO Observatory, which was later joined by Virgo. So, if gravitational waves of astrophysical origin can be detected, why not looking for those caused by cosmic inflation and the post-inflationary high-energy phenomena that followed? Figueroa works in LISA collaboration, the mission of the European Space Agency (ESA) to create an observatory of gravitational waves in space. Following the success of the LISA Pathfinder, a satellite that tested the feasibility of the technology, ESA has already officially approved LISA launch in 2034.

Figueroa has coordinated several working groups at LISA on what these stochastic gravitational wave backgrounds would look like and how they could be detected. Unlike those of astrophysical origin, these waves would not produce a pulse but a continuous noise with identical statistical properties in each part of space. In addition, the IFIC researcher highlights LISA's potential to detect various phenomena, both those related to cosmic inflation and phase transitions or the dynamics of 'cosmic strings'.

"I chose to come to IFIC to develop my work as a Ramón y Cajal researcher because it is a leading Spanish center in theoretical physics. Moreover, IFIC has an important experimental part which I am sure will bring new insights to my research", says Daniel G. Figueroa. In addition to collaborating with the IFIC theoretical groups working in astroparticle and high energies physics, the researcher will be in contact with the group of the University of Valencia working in Virgo. 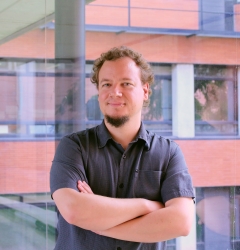