Fernando Carrió, electronic engineer and researcher at the Corpuscular Physics Institute (IFIC, UV-CSIC), has received the ATLAS Outstanding Achievement Award for helping to validate the new electronics of the ATLAS hadronic calorimeter, one of the great experiments of the Great Hadron Collider at CERN. The award has been shared with Jalal Abdallah, from the University of Texas at Arlington and a former IFIC member.

Specifically, Fernando Carrió receives this award for his outstanding contributions to the integration of the TileCal HL-LHC Demonstrator in the general data acquisition system of the ATLAS experiment. This is a prototype of the TileCal hadronic calorimeter reading system, which will allow the validation of the new data acquisition electronics designed for the future upgrade of the Large Hadron Collider. More advanced electronics, which will allow the detector to operate with greater luminosity and high levels of radiation, while improving the quality and quantity of the data obtained, by providing scientists with everything from more precise measurements for the study of the Higgs Boson to information for the study of new physical theories beyond the Standard Model.

The reading system that TileCal uses in the current data collection period – Run-3 – will be replaced by a new system as of 2026, in order to adapt it to the characteristics – high radiation levels, different bandwidths, etc. – of the new ATLAS data acquisition system in the future version of the Large Hadron Collider (LHC), the High Luminosity-LHC (HL-LHC), which will be operational in 2029.

The ATLAS Outstanding Achievement Award was established in 2014 by the ATLAS Collaboration, one of the major experiments at CERN’s Large Hadron Collider (LHC), to recognise the most outstanding achievements of the contributions made to the experiment. Applications come from across the collaboration, in areas such as technical coordination or detection systems, and in areas of activity such as enhancement, combined performance and outreach. The winners are selected annually by the Advisory Group of the President of the Collaboration Council. In this edition, 9 prizes have been awarded out of the 84 nominations received.

Fernando Carrió Argos is a postdoctoral researcher in the Department of Experimental Physics of the IFIC for the VAL R+D program of the Valencian Government. His research focuses on the design of a new ATLAS Hadron Calorimeter data acquisition system for the Large High Luminosity Hadron Collider (HL-LHC, CERN). His interests include the development of FPGA-based massive data acquisition and processing systems for High Energy Physics experiments, the development of artificial intelligence algorithms in FPGAs, and signal and power integrity techniques for high speed. In 2017 he received the Doctor award for the best doctoral thesis from the Official College of Telecommunications Graduates and Technical Engineers (COGITT). Throughout his career at IFIC since 2010, Carrió has also collaborated in the TileCal, ITk, KM3Net, AGATA and TRACE experiments.

The award has been shared with Jalal Abdallah, from the University of Texas at Arlington and a former member of IFIC. 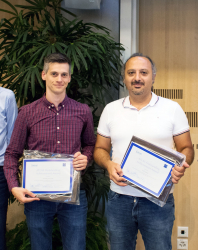 From left to right, Fernando Carrió Argos and Jalal Abdallah.