Pilar Hernández Gamazo, Professor of Theoretical Physics of the University of Valencia and researcher at the Instituto de Física Corpuscular, becomes a member of the body that sets the scientific objectives of the largest particle physics laboratory in the world, CERN. Her appointment, for three years, takes place at a crucial time for high energy physics, since it is decided which project will happen to the Large Hadron Collider (LHC), the world’s largest particle accelerator.

The scientist of the Instituto de Física Corpuscular (IFIC), joint centre of the University of Valencia and the CSIC, has been appointed member of the Scientific Policy Committee (SPC) of the European Particle Laboratory, CERN, the largest centre of fundamental physics research of the world. This committee was created in the origins of CERN (1954) as an advisory body to establish the scientific objectives of the laboratory, and is made up of prestigious scientists from around the world.

The Committee issues recommendations on the scientific projects carried out at CERN, as well as on organisational and personnel aspects of scientific relevance, including the visitor program and the permanent staff nomination. It is made up of 25 members, including its president and several ex officio members, among which are the director of CERN, Fabiola Gianotti, and the president of the Council, the highest governing body of the laboratory, Ursula Bassler. The SPC meets four times a year, in the same week that the Council session takes place.

The Scientific Policy Committee also advises the Council regarding the European Strategy for Particle Physics, the ‘roadmap’ that runs the future of the discipline in the continent. The scientific community is in the process of renewing this strategy, whose latest version dates from 2013. Among the most important issues is deciding which will be the next major project to replace the LHC when its operation stops, planned at the end of the decade of 2030.

SPC members are elected at the proposal of the president by at least two-thirds of the members of the CERN Council, based solely on their scientific merits. Its appointment occurs ad personam, for a period of three years, renewable once.

Pilar Hernández graduated in Physics at the Autonomous University of Madrid in 1990, the year in which she obtained the first National Bachelor’s Degree Award. In 1993 she obtained a PhD from the same University with an extraordinary award. Between 1993-1996, she was a Junior Fellow at Harvard University (USA), and then joined the CERN Department of Theory, first as Fellow and then as Staff. In 2003 she returned to Spain and joined IFIC as a full professor in the Department of Theoretical Physics of the University of Valencia. Since 2008 she is Professor of Theoretical Physics of the University.

Hernández is an internationally recognised particle physics expert. She has made important contributions to the physics of neutrinos, to the application of effective theories in the search for new physics, to the origin of the asymmetry between matter and antimatter in the Universe and to the study of quantum chromodynamics in a space-time grid. It has more than 100 scientific publications and has given more than 70 lectures and guest courses at international scientific conferences. She has been a member of numerous scientific committees and evaluators. She is currently coordinator of the Physics Doctorate Program of the University of Valencia. 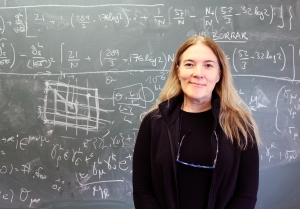 Pilar Hernández Gamazo, Professor of Theoretical Physics of the University of Valencia and researcher at the Instituto de Física Corpuscular.