The KM3NeT/ARCA neutrino telescope, in which IFIC participates, already has six detection units in operation

This week there has been significant progress in the construction of the KM3NeT subsea infrastructure. Five new ARCA neutrino telescope detection units have been installed, which are already operational and collecting data. The Corpuscular Physics Institute (IFIC, CSIC-UV) has actively contributed to the design, construction and calibration of these lines.

Located in the Mediterranean Sea at a depth of 3,500 meters and about 80 km off the coast of Capo Passero, in Sicily, the ARCA telescope, together with its brother ORCA, located off the coast of Toulon, France, will allow scientists to identify astrophysical sources of high-energy neutrinos, as well as studying the properties of the most penetrating and elusive of elementary particles, the neutrino. Furthermore, both detectors will also provide unprecedented opportunities for studies in Earth and Marine Sciences.

Upon completion of construction, the KM3NeT / ARCA detector will form a network of more than two hundred detection units. Each of these units, consisting of a 700 m high vertical line, houses 18 modules equipped with ultra-sensitive light detectors that record the faint flashes of light generated by neutrino interactions in the dark depths of the Mediterranean Sea.

In total, there are already six detection lines currently operating in what is considered the initial core of the KM3NeT / ARCA neutrino telescope. Together with the six lines already installed and taking data at the ORCA site, the KM3NeT observatory now has a sensitivity comparable to that of its predecessor, the ANTARES neutrino telescope.

KM3NeT is an international collaboration of more than 250 scientists from more than 50 scientific institutes around the world. KM3NeT has been included in the list of high priority projects selected by the European Strategy Forum for Research Infrastructures (ESFRI). According to Collaboration spokesperson Paschal Coyle, the successful deployment and operation of various ARCA detection units is another big step forward for the KM3NeT project. “Now we will continue at full speed with the construction of hundreds of detection units for installation in the French and Italian locations”, he said.

The ANTARES-KM3NeT group of the Corpuscular Physics Institute, a mixed centre belonging to the CSIC - University of Valencia, has been participating in neutrino telescope projects for more than two decades. As Juan de Dios Zornoza Gómez, main researcher of this group points out, “this technical success brings us closer to new scientific achievements, given the enormous potential that this detector has both for astrophysics and fundamental physics as well as for other fields such as marine science”.

The main task of the IFIC related to this operation has been the design and testing of the main electronic cards that integrate the signals received in the light detectors. You also have responsibilities in calibrating the detector using LED-based light sources. A test bench is currently being prepared at the IFIC for the integration of the bases of the next lines. In parallel, it continues its work of data analysis of the first lines and of study of the benefits of KM3NeT.

For its part, the activities in Italy are supported by the Sicilian Region within the framework of the IDMAR project. The objective of IDMAR is to improve the scientific infrastructures in Sicily, including KM3NeT / ARCA. “This campaign once again demonstrates the technological capacity of KM3NeT and IDMAR to carry out these complex marine operations”, said Giacomo Cuttone, scientific director of the IDMAR project. 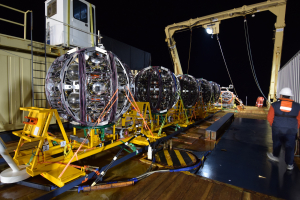